In a tale of sand, songs, survival and untimely erections, it takes a trek along the Australian coastline for Benjamin Allmon to find himself, and the true key to happiness.

It is 2006. After more than a decade trying to make it in the music industry, singer-songwriter Ben is getting desperate. As his former bandmates settle into sensible careers he gives it one last shot and records his debut album. The only problem – how to promote it?

In homage to the Deep South bluesmen who walked and played their way to Chicago, he decides to trek 1000 kilometres of Australian coastline. Kissing his girlfriend goodbye, he sets off with a guitar, a sleeping bag and a heroic miscalculation of what he’s getting into.

Beset by bushfires, dingoes, and septuagenarian nudists, fame seems to forever be over the horizon. Penniless and lost, the tour soon becomes a matter of survival instead of climbing the charts. Through his encounters with the people you only meet when walking slow and sleeping rough, Ben realises that what he wanted at the outset has changed enormously. 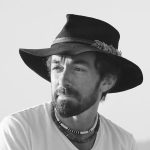 In 2016 Odyssey Books published his music/adventure memoir, Foot Notes. His second book, The Saltwater Story, is a fully-illustrated hardcover collaboration with renowned photographer David Kelly, as well as a feature-length documentary. It has been shortlisted for the Queensland Literary Awards’ Premier’s Award for a Work of State Significance.

A songwriter with twenty years’ experience, he wrote the bulk of the soundtrack for The Saltwater Story, and his latest album – Sound Tracks – was released in 2016 to accompany Foot Notes, and contains music written and inspired by his 1000km trek. His next album, Wave, is currently in production.

He is a member of APRA (Australasian Performing Right Association), the ASA (Australian Society of Authors), the QWC (Queensland Writers Centre), and is an accredited audio engineer.

He has one wife, one son, and two left feet.

There are no reviews yet.

Be the first to review “Foot Notes” Cancel reply