Keeper of the Way (Crossing the Line #1)

After news of grave robbing and murder in Dun Ringall, the ancient stronghold of Clan McKinnon on the Isle of Skye, Rosalie realises it is time to share her family’s secrets. Descendants of the mystical Ethne M’Kynnon, Rosalie tells of a violent rift that occurred centuries earlier, splitting Ethne from her sisters forever and causing relentless anguish and enmity between ancient families.

Meanwhile, Algernon and Clement Benedict have arrived in Sydney searching for the lost relics of their family. They are driven by revenge and a thirst for power, and will take what they can to reinstate their family heritage. Their meddling with ancient magic will have far-reaching effects, as they fail to realise ther role in a far greater quest.

In the grounds of Sydney’s magnificent Garden Palace, danger grows as an ages-old feud of queens and goddesses heats up. The discovery of arcane symbols bring the distant past in a foreign land to Australia and will cause a profound struggle with tragic results, a surprising new recruit from an unknown world, and the complete destruction of the palace.

Set around stories and characters in 1882 Sydney, Keeper of the Way includes current affairs, people and buildings long gone, and gives a voice to people history doesn’t always listen to. 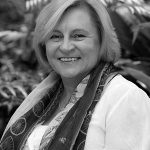 Patricia Leslie is an Australian speculative fiction writer blending history, magic, and fantasy in novels that explore hidden and untold stories, giving a voice, through fiction, to those in our past who have until now been rendered voiceless (in the history books anyway). Patricia hails from southern Sydney where she fills her fast emptying nest with books, writing projects, and two chickens named, Gloria and Attilla the Hen.

1 review for Keeper of the Way (Crossing the Line #1)